The San Francisco Estuary is the largest estuary in California. Its watershed extends from the ridgeline of the Sierra Nevada mountains to the strait of the Golden Gate, including almost 60,000 square miles and nearly 40% of California. Half of the state’s surface water supply falls as rain or snow within this region.

The Estuary’s waters and wetlands are a biological resource of tremendous importance, providing critical winter feeding habitat for over a million migratory birds, a productive nursery for many species of juvenile fish and shellfish, and a year-round home for a vast diversity of plants and animals. For thousands of years, humans have also lived and thrived along this rich hydrologic corridor, from the Ohlone, Miwok, Southern Pomo, Wappo, and Patwin peoples who first stewarded this land to the diverse international community that inhabits the region today. See the SFEP Indigenous People’s Acknowledgement for more information about these Indigenous groups and the role they play in managing the Estuary today. 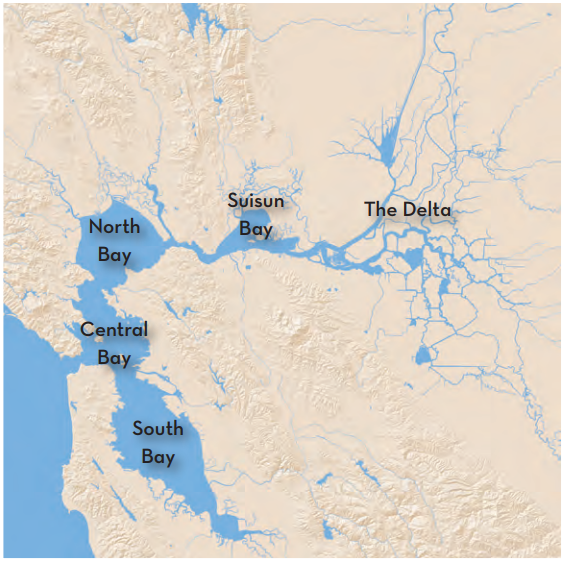 San Francisco Bay is made up of four smaller bays. The farthest upstream is Suisun Bay, which includes a vast area of marshes. Suisun Bay lies just below the confluence of the Sacramento and San Joaquin Rivers. Suisun and its neighbor San Pablo Bay, sometimes called the North Bay, are surrounded mostly by rural areas, and are strongly influenced by freshwater outflows from the rivers. The Central Bay is the deepest and saltiest of the four bays. Cities and industries occupy most of its shores. The more shallow South Bay extends south into quiet backwaters surrounded by restored marshes, salt ponds, and office parks and lagoon communities.

Upstream of the Bay, the Sacramento-San Joaquin River Delta is a 1,000 square-mile triangle of diked and drained wetlands. Small remnants of once-extensive tule marshes still fringe the channels that wind between the flat, levee-rimmed farmlands of the Delta’s myriad islands. Before it was diked and drained, the Delta gathered in the fresh waters of the Sacramento, San Joaquin, Mokelumne, and Cosumnes rivers and moved them all downstream through a complex array of channels into the San Francisco Bay. Today, the Delta, with its rich farmland, is the engineered junction of one of the nation’s largest plumbing systems, where much of the available fresh water is diverted to supply California’s population centers and Central Valley Agriculture.

How Healthy Is The Estuary?

The State of the Estuary Report, updated in 2019, provides a comprehensive report for the Estuary.

What Will It Take to Achieve a Healthy Estuary?

A healthy Estuary needs more freshwater flows through the system, more flooding in the right places, more space for habitats and species and connections between those spaces, more sediment moving through watersheds, and less hardscape, among many needs. A healthy Estuary also needs more monitoring of estuarine conditions, as well as funding to learn from and adapt to what works and doesn’t work in restoration and intervention.