Speakers discuss issues facing Estuary wildlife and their wetland habitats, as well as drones and other new tools that will help future management.

State of the Estuary Conference: Habitat and Wildlife Sessions 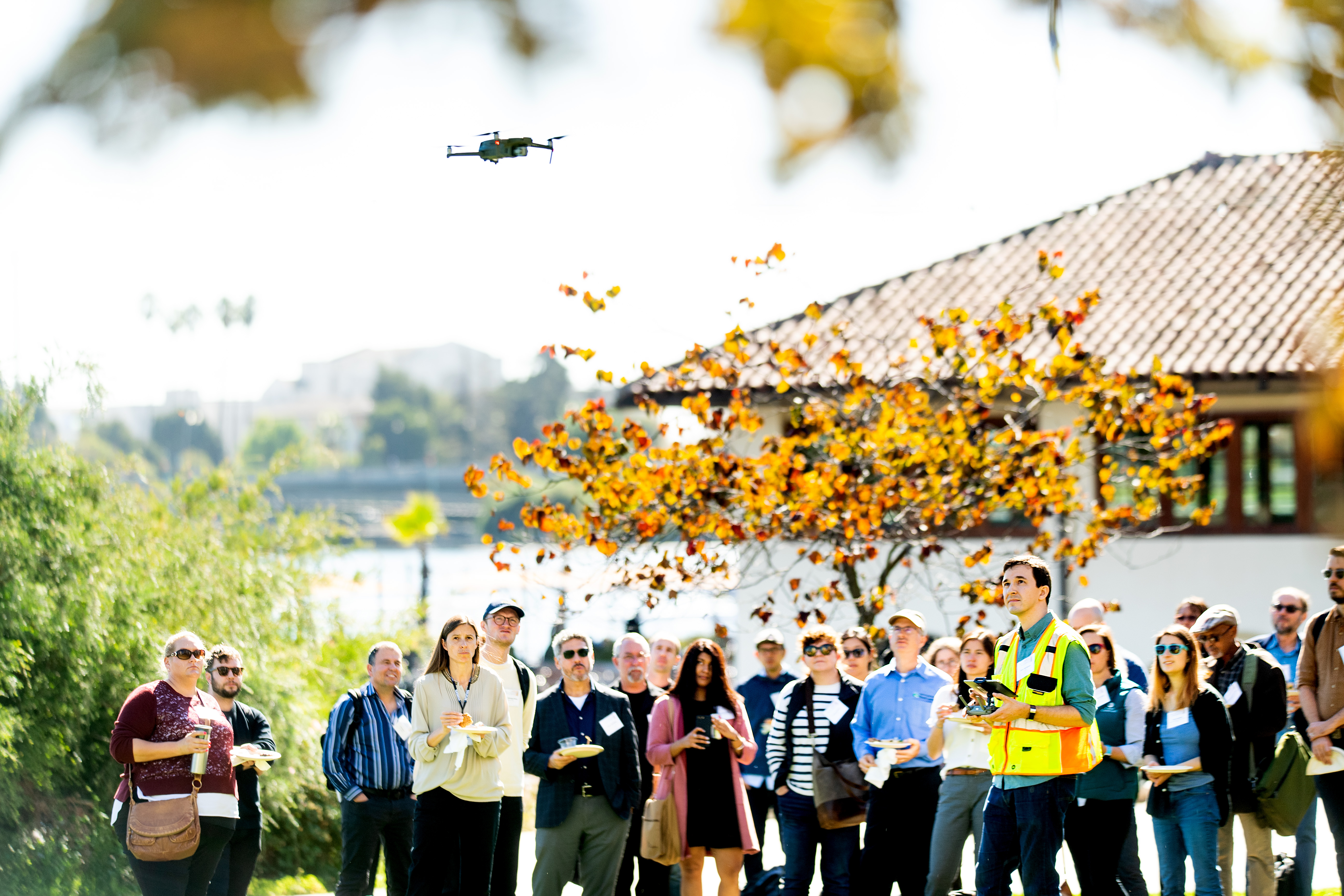 State of the Estuary Conference presentations featuring decades of data on fish, ducks, seabirds, and cetaceans revealed both hopeful and alarming trends.

The overall community condition of the Estuary’s fish (abundance, distribution, diversity, proportion of native to non-native species) has declined, reported the National Resources Defense Council’s Christina Swanson, citing the 2019 State of the Estuary Update, Bay Study and other surveys.

The breeding success of California least terns and Brandt’s cormorants reflects the status of the forage fish they feed on, according to Dan Robinette of Point Blue.

Some gray whales now use the Bay as a feeding stopover, while long-absent harbor porpoises have returned and bottlenose dolphins have arrived, reported Tim Markowitz of the Marine Mammal Center.

Rachel Johnson of the National Marine Fisheries Service set out to learn why tiny Chinook salmon only make it all the way to the San Francisco Bay in really wet years. Pursuing the question led to unexpected discoveries.

“One cool finding is that flow had a pretty important role in the number of babies that could be produced for a given number of spawners,” said Johnson, after presenting this work during a State of the Estuary Conference plenary. “The habitat could produce a lot more in a high flow year.”

The state goal is to allow at least 122,000 to 180,000 adults per year to escape the fishery and return to the spawn, which is fittingly dubbed escapement. Johnson found that in years when salmon returns exceeded the state criteria for escapement, production of babies was far higher. “If you double escapement, it makes a very big difference,” she said. “This shows there’s a lot more capacity for juvenile salmon production than we thought was in the system.”

Buffering the Bay’s shoreline against rising waters and storm surges will require 100,000 acres of tidal marsh by 2030. “Monitoring supports that effort,” said Xavier Fernandez of the San Francisco Bay Regional Water Quality Control Board at the State of the Estuary Conference. “Looking at the past guides the future.”

Dave Halsing, who leads the South Bay Salt Pond Restoration Project, is eager to participate. “We have benchmark sites, project sites, and monitoring data,” Halsing said. “Our goal is to share all that with the restoration community.”

One unknown that would benefit from regional monitoring involves sediment needed to rebuild tidal marsh in former salt ponds. “We’re working on it,” said BCDC’s Brenda Goeden, “but we don’t know how much is coming into the system or how much we need to maintain habitats.”

“There are various sediment monitoring efforts but they’re not necessarily connected,” said Jeremy Lowe with the San Francisco Estuary Institute. “We should connect the dots.”

Needs for launching the Wetland Regional Monitoring Program include funding, a common data management system, and standardized protocols. “If everyone collects data the same way, everyone can use it,” said Rachel Tertes with the Don Edwards San Francisco Bay Wildlife Refuge.

Regulators on the conference panel stressed that regional monitoring will not replace project by project monitoring. “We have too many project specific questions,” said Luisa Valiela who leads regional Clean Water Act programs for the U.S. Environmental Protection Agency.

In a State of the Estuary Conference session on new and emerging remote-sensing technologies, Tony Hale of the San Francisco Estuary Institute sang their praises. “New technologies are allowing us to see the landscape in different ways,” Hale said later in an interview.

Later in the session, UC Berkeley professor Iryna Dronova discussed new applications of remote sensing for mapping and monitoring vegetation. Of the more than 1,900 satellites orbiting the Earth, she noted, nearly 700 are used primarily for Earth observation and Earth science.

In a novel twist, Mark Marvin-DiPasquale of the U.S. Geological Survey presented a method of using satellite data combined with boat-based monitoring of the Delta to measure mercury from space. “Once you start making those connections [with remote sensing data], the question becomes, how far can we take it,” he said.

State of the Estuary Report 2019 Update on Fish

State of the Estuary Report 2019 Update on Tidal Marsh

Marsh Mice Not So Picky, December 2019

Tough Year for Gray Whales and other Marine Mammals, August 2019

Trail to a Fire-Safe Watershed