Nietzsche was wrong:  what doesn’t kill you doesn’t necessarily make you stronger. Sublethal doses of toxic copper can reduce a salmon’s chances of survival, but new research suggests impacts may be different in saltier water.

A decade of research by David Baldwin of NOAA’s North west Fisheries Science Center  and other biologists has shown  that in some situations, very  low levels of dissolved copper interfere with a salmon’s ability to detect smells. This can  be a matter of life or death:  salmon rely on their olfac tory sense to avoid predators,  locate prey, and home in on  their natal streams when they  return from the ocean to spawn. Earlier studies involved juvenile fish in freshwater settings. Baldwin’s latest project, funded by the Regional Monitoring Program for Water Quality in San Francisco Bay and the Copper Development Association, suggests things are different in brackish and salt water. At salinities that a young salmon is likely to encounter in San Francisco Bay, even copper concentrations well above the current water quality objective had no effect on test subjects’ olfactory function.

“As freshwater fish move into the estuary they become, in effect, protected from copper,” says Baldwin.

Copper enters the watershed via wastewater discharges, as well as urban and agricultural runoff (some pesticides contain copper), and automobile brake pads. The use of copper in brake pads is now being phased out thanks to state legislation and the efforts of the Brake Pad Partnership (parallel efforts are also in the national pipeline).

To protect all the beneficial uses of Bay, the state’s site-specific water quality objectives are 6.9 micrograms per liter (μg/L) for the South Bay and 6.0 μg/L for the Central Bay and San Pablo and Suisun Bays.

Recent RMP measurements indicate that dissolved copper levels in the Bay are under  4 μg/L, close to what studies in  the 1970s found.  However, concentrations as low as 3 μg/L have been implicated in behavioral impairment in juvenile salmon in freshwater. They can’t detect the chemicals released when another fish is attacked by a predator, and don’t take evasive action. 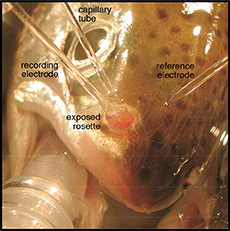 To tease out effects on fish, Baldwin has worked with juveniles — smolts — of both Chinook salmon, a species that travels through the Bay and Delta, and coho, a coastal-stream spawner.  Smoltification is  a complex process, changing the young fish’s appearance and physiology from a freshwater phase to a seawater phase to adapt it for life at sea. Baldwin used electrodes to measure how a smolt’s olfactory system responded to a mix of amino acids after exposure to a strong solution of dissolved copper, 50 μg/L, at a salinity of 10 parts per thousand (ppt.) That salinity was chosen because it matches the salinity of the fish’s internal fluids and tissues, but it’s within the estuarine spectrum.

A seabound Chinook would encounter salinities of 2 ppt where the Sacramento River passes Rio Vista, 7 ppt in San Pablo Bay, and 30 ppt at the Golden Gate.

In Baldwin’s lab, while pre-smolted salmon tested in freshwater show a reduced olfac tory response due to copper exposure, when tested in 10 ppt there’s no reduction. Likewise, in their saltwater phase, copper exposures in 10 ppt appear to have no impact.

Previous freshwater work demonstrated copper olfactory toxicity in a salmon relative, the steelhead, the anadromous form of the rainbow trout. “I don’t see why the results of the estuarine/seawater work in coho and Chinook couldn’t be generalized to steelhead,” Baldwin adds. “It’s unlikely that the steelhead olfactory system is radically different.”

What’s not clear is whether salinity levels below 10 ppt would still  be protective. And what about the returning adult salmon, seeking out water that smells like home? That research has yet to be done. But adults have less prolonged exposure to estuarine contaminants than smolts. “Smolts use the estuary as an arena to feed and rear, trying to decide ‘Am I really ready to go out in the ocean?’” Baldwin explains. Adults, however, don’t dither around on their way to the spawning grounds.

NEXT STORY: Cullinan Finally in the Fold

Joe Eaton writes about endangered and invasive species, climate and ecosystem science, environmental history, and water issues for ESTUARY. He is also "a semi-obsessive birder" whose pursuit of rarities has taken him to many of California's shores, wetlands, and sewage plants.

Trail to a Fire-Safe Watershed